It’s time to meet the autonomous regions not in the Basque country. The Northern Spain has some fascinating areas with dramatic scenery and lots to discover. 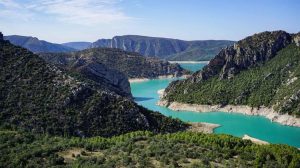 Navarre is a land of diversity.  Over the few kilometres that separate north and south Navarre you can experience a whole kingdom of natural and cultural diversity which is quite astonishing given the size of the region. Green and pretty Pamplona is the capital of the great festival of San Fermín. Navarre is the gateway to the Camino de Santiago and a land that knows how to enjoy its food (top quality meat), and they say the people of the region are kind and live well.

The castle-palace of Olite was the residence of the kings and queens of the kingdom of Navarre until its union with Castile in the 16th century. It was declared a National Monument in 1925. During the 13th-15th centuries it underwent several transformations, although the most important developments took place at the time of King Charles III the Noble. Visitors can start the tour in the Old Palace, today converted into a Parador* Hotel.

From the Cantabrian Sea to the Mediterranean, the Pyrenees mountain chain rises like an immense natural barrier between Spain and the rest of the continent. Its dominions extend along 450 kilometres of peaks reaching 3000 metres high, leafy valleys and picturesque centuries-old towns and villages. A meeting point for a variety of cultures and gateway to the Route to Santiago, the Pyrenees have countless treasures waiting to be discovered in each of the autonomous regions which share them: Navarre, Aragon and Catalonia. 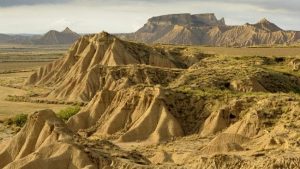 This is one of only a few deserts in Europe and it’s definitely the most impressive of them all. There are several unique geological formations and some lovely landscapes. Explore the park by car or get in a little deeper by hiking or riding a bike on one of the many paths.

To the south-east of Navarre, the 41,845 hectares unfold that make up this Nature Park, declared a Biosphere Reserve by UNESCO in the year 2000, and which includes three Nature Reserves.

It is partially a semidesert landscape, affected by pouring rains that shaped its plaster and clay terrain. Wide plains alternate with ravines, cliffs and hills that reach a height of 600 metres. The area known as Bardena Blanca comprises the whitest landscapes, made of gypsum substratum and steppe vegetation. Aleppo pine forests and clayey soil, on the other hand, form the area known as Bardena Negra. The diversity found in this natural setting is protected by its designation as a Nature Reserve in three specific locations.

The Bardenas park is not an area on the tourist trail, arguably because tourists get distracted by nearby Pamplona, San Sebastian, and Bilbao, all massive tourist destinations from the ever-alluring Basque country.

However, where most of the filming took place was in the Bardenas Reales natural park, that with its semi-deserted landscape of carved sandstone, canyons, and its famous towers of stone known as cabezos, is about as natural a location for Game of Thrones as you could imagine.

Aside from its truly unique and alien looking landscape, Navarre is also one of the greenest areas of Spain, with the Ebro river making the surrounding lands particularly fertile. Every April locals celebrate Jornadas de Exaltación y Fiestas de la Verdura with festivities celebrating the bounty of the land. It ends on 1 May and sees the celebrations of all things green, yellow, and red! 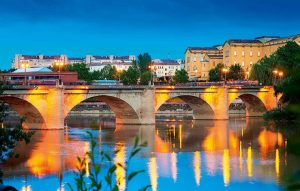 La Rioja is famous for the quality of its wines. Apart from wine tasting, a visit to this region also offers a range of activities which take place in and around the extensive vineyards, including horse-riding, hot-air ballooning, 4×4 routes…This region is also closely linked to the famous Way of Saint James pilgrim route, and has a whole host of cultural attractions.

Laguardia is a walled village that has not change much since the 13th century. 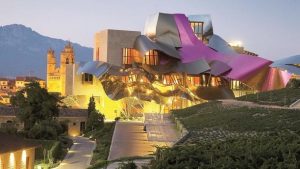 Bodegas Ysios one of the most fascinating wineries in the Rioja region. Designed by the architect Santiago Calatrava, it perfectly mirrors the undulating mountains, which rise behind it.

Logrono is the capital of the area. Cross the Puente de Piedra stone bridge.  One of the most recognised symbols of the city, which crosses the River Ebro from the Old Town. Also known as the San Juan de Ortega Bridge, it dates back to 1884 and is also the entrance way to the city along the Camino de Santiago.

Sierra de Cebollera Nature Reserve. Is a forest surrounded by the central mountains of the Northern Iberian Mountain Range, in the region of Cameros, on the border of the province of Soria. In this protected space, there are some of the best examples of forests in the Iberian Mountain Range. 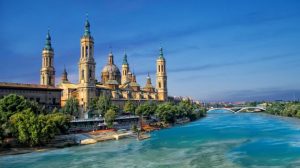 Is Spain’s fifth largest city and the capital of Aragon region.   Zaragosa is a treasure trove of historical and cultural gems awaiting discovery. Tourists will find ancient Roman ruins, the first Marian church in Christendom, and fabulous art museums. Follow the “Caesaraugusta Route” to find the forum, thermal baths, and theater of the first- to second-century Roman town (named after Emperor Augustus) that once flourished here. The faithful must visit the Basilica of Our Lady of Pilar, one of the most important pilgrimage churches in Spain. Equally fascinating are the 12th-century Moorish palace and the splendid UNESCO-listed Mudéjar architecture of San Pablo, Santa Maria Magdalena, and San Juan de los Panetes churches. Art lovers will also appreciate the museums that display Francisco de Goya’s famous paintings as well as works by contemporary artist Pablo Serrano and the renowned sculptor Pablo Gargallo. 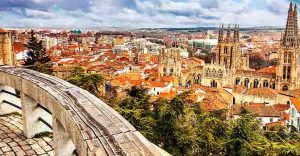 Burgos, a city in Castilla-Leon situated in the Pilgrim’s Road to Santiago de Compostela, still preserves important vestiges of its medieval splendour. The city, which was the capital of the unified kingdom of Castilla-Leon for five centuries, boasts a masterpiece of Spanish Gothic architecture: the cathedral of Burgos, declared World Heritage. Aside from a visit to the historic quarter, declared of Cultural Interest, you can take a quite interesting walk along the banks of the Duero and Arlanza rivers. Great places to approach a delicious, varied cuisine.

Santiago de Compostela is the final destination on the Camino de Santiago. 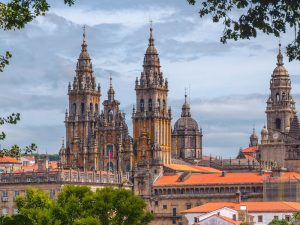 The Galician capital is synonymous with the Camino, an ancient pilgrimage route, born in the 9th century, that has linked the city with the rest of Europe ever since. Every year many thousands of pilgrims set out on foot, by bike, or even on horseback, to live this experience that combines adventure and spirituality. The final goal is the Cathedral in Santiago, one of the sacred cities of Christendom. This is, without a doubt, an unusual, unforgettable way to travel through Spain.

Other places worth to visit in Galikia is Cathedral Beach which is often referred to as one of Spain’s best beaches. Located on Galicia’s north coast, huge rock formations, which look like giant stone cathedrals. 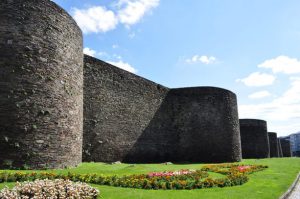 The walls of Lugo were built in the later part of the 3rd century to defend the Roman town of Lucus. The entire circuit survives intact and is the finest example of late Roman fortifications in western Europe.

Their total length of 2117 m in the shape of an oblong rectangle occupies an area of 1.68 ha. Their height varies between 8 and 10 m, with a width of 4.2 m, reaching 7 m in some specific points. The walls still contain 85 external towers, 10 gates (five of which are original and five that were opened in modern times), four staircases and two ramps providing access to the walkway along the top of the walls, one of which is internal and the other external. Each tower contained access stairs leading from the intervallum to the wall walk of town wall, of which a total of 21 have been discovered to date.

The defences of Lugo are the most complete and best preserved example of Roman military architecture in the Western Roman Empire.

is another of Northern Spain’s stunning beaches. Almost tropical looking with its fine powder white sand and incredibly blue sea, it lies on the Islas Cies, off the coast of Vigo in Galicia. More than one kilometre in length, you can be sure that you’ll find a place to lay your towel here. The best sandy beach in the world according to the Guardian.

*‘Parador’ is the name given in Spain to luxury hotels managed by a state-run company and usually located in buildings of historic importance such as fortresses, monasteries and castles; but also new buildings set in nature reserves and areas of outstanding beauty.  Paradores de Turismo de España, the public company managing these luxury hotels, was founded by King Alfonso XIII to promote tourism in Spain. Today there are 94 paradores from 3 to 5 stars all across Spain

Parador comes from the Spanish ‘parar’ which means to stop, halt or stay. The concept behind parador is to open exceptional historic properties to the public, and use the hotels profits to maintain these beautiful buildings. Most of them also have excellent restaurants offering traditional cuisine at a high standard using local and seasonal produce.

Regardless of the parador date or style, they all are refurbished to high standard offering all modern comforts, as long as they comply with protected building regulations. Prices at Spanish paradores will vary depending on the room, region and season but they are a real treat to the pilgrim!